Start a Wiki
The Great Plains is a very diverse region which led to diverse forms of architecture influenced by available materials, climate conditions, and cultural preferences. 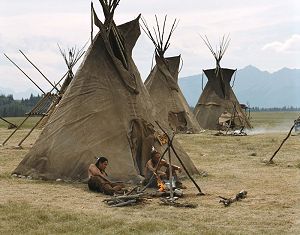 In the beginning stages of architecture, grass was an important resource. It was used for thatching, matting, and underlay, and wattling for clay walls. Pole and grass huts were useful in several Central Plains locations. Also, the soils of the grassland were important for construction. Clay was not only used for walls, but to make bricks and plaster floors. Consolidated soils and sedimentary rock were also used as sites to live. The structure known as the tipi was first made out of skin of Bisons or other animals. The different house-patterns included circular, rectangular, or square, four-posted structures. The development of the railway system sparked the use of wood as building materials. Sod walls were also a result of rail technology.

Natives built homes to their liking, while immigrants brought over their style of building with the materials given. Houses developed from being one-roomed halls that were open to the land to having kitchens and parlors, and some people even added bedrooms and a dining room emphasizing a need for privacy making them more modern.[1]

It is not likely that a person would come across a skyscraper in the Great Plains. More urbanized cities may have a few, but in rural areas it is highly unlikely. This could very much be related to the differences in workforce among rural and urban areas. More corporate white collar jobs will be found in urban areas that need multiple floors for different divisions, or share a building with multiple companies. In rural areas the jobs do not require such space. With the wide open scope of land, jobs among rural areas are more related to agriculture, education, and manufacturing. One may be more likely to come across a grain silo than a tall skyscraper.

Retrieved from "https://greatplains.fandom.com/wiki/Great_Plains_Architecture?oldid=4701"
Community content is available under CC-BY-SA unless otherwise noted.